Due to the actual sanitary situation linked to Covid-19, our next lunch is cancelled. Sorry for the inconvenience.

Convictions, tools and career path of an ‘atypical’ manager of the year 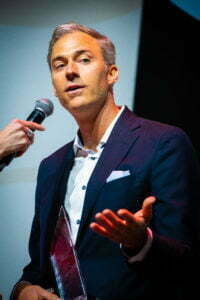 Yvan Verougstraete will share with you some of his convictions about the current state of our society and its political and economic consequences.

He also will describe some of the keys that helped him turn the obstacles he encountered into opportunities. And he will illustrate this with some concrete examples from his personal journey.

Since 2014: Founder and CEO of the Medicare-Market group
First ‘parapharmacy’ sales outlet opened in Gosselies in December 2014. The chain, which also has an online presence, currently has 42 parapharmacies and 18 pharmacies in BeLux, as well as 4 parapharmacies in Italy and 1 in France.

Prior to that:
2012 Viangro Group: Turnaround Officer – Director
Assignment from the Supervisory Board aimed at assisting the Managing Director to put a far-reaching recovery plan in place for the Viangro Group.

2010-2011 TastyFood: Managing Director
Working with the TastyFood team, we consolidated a portfolio of products and commercial relationships.
TastyFood is recognised as one of the leaders in the ready-meals sector. It occupies a prominent position in terms of quality and innovation, thanks to its cutting-edge R&D policy.

2005-2009 Divine Cuisine: Founder and Managing Director
Establishment of a company manufacturing quality ready-meals for mass retailing. ?To continue the adventure and enable the business to grow to a larger size quickly, we decided to merge Divine Cuisine with the catering arm of the Viangro Group… where it became: TastyFood.

PARTICULAR ACHIEVEMENT
Travelled round the world as a family in 2013.